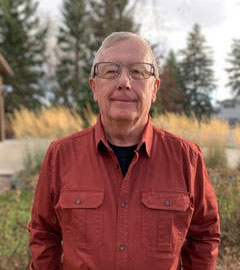 My wife Vicki and I were raised in Calgary. When I graduated from the U of C with my education degree, The County of Vulcan was the first school board to offer me a teaching job – teaching junior high at CCHS. Neither of us had even heard of Vulcan and I had to use a good old-fashioned paper map to find the place. Our original plan was to move to Vulcan for two years and then head back to the big city. Well that was in September 1976 and we are still here!

I was asked why I put my name forward to be a trustee and why I continue to serve on the Vulcan County Health and Wellness’ Board. The story began when Vicki and I moved to Vulcan. We have made many life-long friendships over these 44 plus years. Our three boys, Greg, Brett, and Alex were born and raised in Vulcan. The people of the town of Vulcan and Vulcan County have been wonderful to us and I wanted to give something meaningful back.

In 2009, I received a letter asking if I would represent the Kinsmen Club of Vulcan at a meeting of municipal leaders, Vulcan County representatives, and concerned citizens from several villages in the county. The focus of this meeting was to discuss the critical shortage of physicians in Vulcan County. I am not sure how it all happened, but three hours later I was the Chair of the Vulcan Physician’s Recruitment and Retention Committee.  I was a member of what is now called the Vulcan Healthcare Professionals Attraction Committee for 11 years and have chaired this committee on two different occasions. Although not everyone agreed with the strategies the R and R Committee used to attract physicians, there are now three physicians working on a fulltime basis and three physicians working on a parttime basis; I guess we must have done something right along the way.

In 2012, I made application to join the VCH&WF Board and was accepted. I was certainly aware that the trustees on the board at that time were developing plans for an addition to the Vulcan Community Health Centre which included a new medical clinic. My initial thought was having a new medical clinic would certainly help attract physicians to our community. Initially, I was focused on making sure that there were enough medical professionals to look after people with medical issues. Today, my focus has expanded to include the “wellness” component of health care and keeping people healthy through education and wellness programming. I am excited to see the wellness spaces in our community health centre. More importantly, I am very excited about being a part of the Foundation’s team helping to augment wellness programming in the Vulcan Community Health Centre.