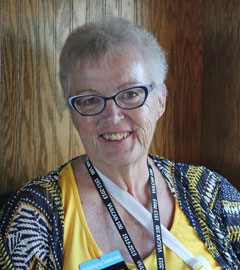 Donna Leigh Graham (nee Williams) was born, raised, married, parented and laid to rest in Vulcan County.  As a founding trustee of the Vulcan County Health and Wellness Foundation, she was fully committed to adding to the availability of health and wellness services in the County.  She believed strongly that we stand on the shoulders of those who came before us and laid the foundations for today.  It was her mission to carry that torch forward.  The Heritage Wall was her last brainchild, conceived before her battle with cancer began.  Undaunted by the toll the disease demanded, she continued to attend meetings and move the Heritage Wall project forward.  She passed on the torch on January 7th, 2018.  Her drive and grit reflect the message of the Heritage Wall.